As marketers, there’s something we need to remind ourselves once in a while: we are not really optimizing websites, but trying to change human behaviour. This is why understanding cognitive psychology and learning how to correctly apply its principles it’s vital to the success of any online business. Bear with us as we go through some of the most prevalent cognitive biases in conversion optimization.

What exactly are cognitive biases?

Cognitive biases are a tendency to think certain ways, oftentimes affecting our capacity of making rational, logical decisions. They have a huge impact not only on consumer behaviour, but on our day-to-day lives.

Cognitive biases are considered “mistakes of reasoning” and they are a result of our brain’s attempt to simplify the way it processes information. This is why people often value their preconceptions and past experiences rather than reality and they also tend to make decisions based on these personal factors.

Fortunately, cognitive biases also have lucrative applications and you can leverage them to improve your online business. Here are 5 of the most effective cognitive biases you can use to increase ecommerce sales. Take the time to understand them and learn how to correctly integrate them in your optimization strategies.

Anchoring or focalism means that the first piece of information people receive will act as an anchor to which they will compare all information they’ll get afterwards.

This cognitive bias highly influences the decision making process of customers and a lot of marketers use it to display pricing plans in a smart way. The ideal option is usually surrounded by a higher and a lower tier so that potential buyers will focus their attention on the middle tier.

In the example below the middle plan is even highlighted by the use of color contrast and shadows, so they’re not being exactly subtle in their attempt of getting visitors to purchase this specific plan.

Summarized, the bandwagon effect is basically groupthink and herd behaviour. People have a tendency to copy other people’s behaviour. More often than not, we do something just because we see others doing it, ignoring or overriding our own beliefs.

The name of this cognitive bias is inspired from the use of a bandwagon –  people used to be encouraged to jump aboard, mesmerized by music and celebration, which were proven to be quite contagious.

As a matter of fact, this technique has been used since the 19th century, especially in political campaigns. Candidates were linked to the idea of having fun and those who didn’t join them on the bandwagon were missing out.

Nowadays, a relevant example is influencer marketing, which is based entirely on the bandwagon effect. Many brands reach out to influencers to promote their products because they know they’ll get a lot of exposure and implicitly, a boost in revenue.

Another way of applying the bandwagon effect in ecommerce is by showcasing the number of customers who have previously bought the products as a form of social proof. Even the reviews are a good example, because it shows how many people have bought, used and rated the product according to their personal experience with it.

The way you present a piece of information influences the decision makers.

When you present a piece of information from two different angles/points of view, people will understand it differently. Therefore, they will draw different conclusions, even though in essence the information is the same.

Framing often comes in the form of gains and losses. Would you rather buy a 90% fat-free yogurt or a 10% fat yogurt?

Siggi’s decided to present its completely fat-free yogurt as having 0% milk fat – this has a huge impact on the buying decision.

4.Fear of Missing Out (FOMO)

I’m pretty sure you’re already familiar with this one. A lot of online brands use urgency and scarcity techniques to target people’s fear of missing out on certain deals, promotions, sales.

FOMO is real and it’s affecting us because it strikes an emotional chord. When presented with the possibility of losing something, we tend to act quickly and get it, even though we didn’t really want it in the first place. Fear of missing out makes us want it. The thought of someone else getting it and missing out on an opportunity is upsetting.

Before we even start rationalizing a decision, we’ve already made that decision at an emotional level and the smallest trigger makes us act on it without thinking about it logically.

Briefly put, the Von Restorff effect states that when more similar objects are present, the one that is different will most likely be the one people remember.

Applying this principle is pretty simple. Identify those elements that are most important to your conversions and you want users to notice and isolate them in order to make them stand out.

A handy example is when you have a product on sale and you want to highlight the new price, the one with the discount already applied. You can simply change the font colour and draw people’s attention to it.

Although quite easy to apply, the isolation effect remains one of the most powerful cognitive biases to use in conversion optimization. Even ecommerce giants acknowledge its vast potential and use it often.

The way you communicate your product’s value to your audience it’s a make or break point in the conversion funnel.

Apply these cognitive biases to write smart, targeted copy and make design changes that drive conversions. If you feel like you’d use some help in crafting optimization strategies or implementing them, drop us a line at contact@ontrack.agency and let’s talk! 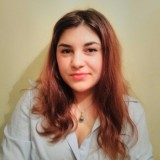 I am a CRO specialist with a focus on consumer psychology & behaviour.